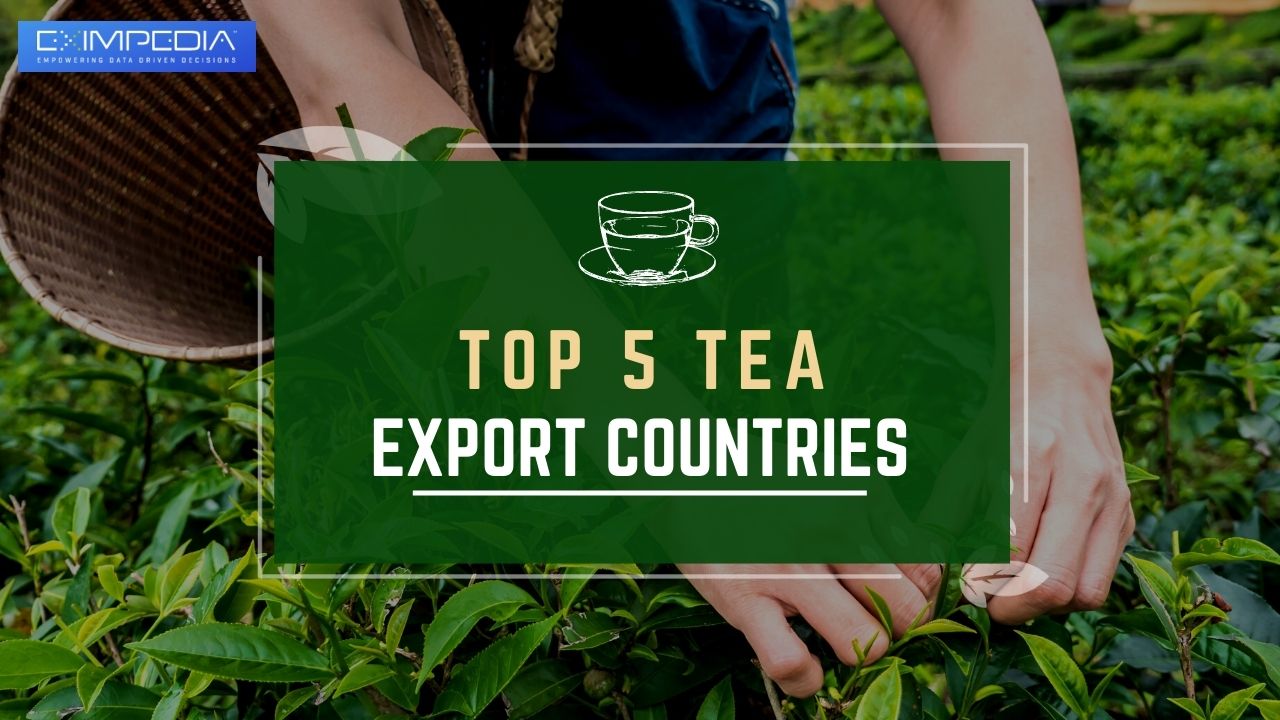 Tea is one of the most preferred beverages all over the world. The land of diversity has a majority population who start their day with a cup of tea. Around the world, tea is consumed as an energizer, a relaxant, an immunity booster, and often a beverage to associate with. In some cases, tea is utilized medicinally to cure illnesses and curb ailments. Also, the Global sales of exported tea from all countries computed US$7.32 billion in 2021, down by -9.4% since 2017 when worldwide tea exports were worth $8.08 billion. Year over year, the importance of worldwide tea exports shrank by an average -of 9.8% compared to $8.11 billion in 2020. In this article, we will know about the top 5 tea export countries.

The demand for Tea Export in Economy

As we know the tea industry has increased year after year, around the world tea is consumed as an energizer or an immunity booster. The consumption volume of tea in India was around 1.1 billion kilograms during the financial year 2021. Consumption of this hot beverage has grown consistently throughout the years. Tea exporters buoyed by the robust market, expect 225 million kg shipments in 2022. The industry is expecting to achieve the pre-Covid level export volume of 250 million kg following year.

The global tea market has noticed strong and continued development in tea production and tea consumption from around the world over the recent decades, while the top tea-producing countries are still conquering the global market with their important tea productions year on year. As health-conscious consumers around the world increasingly choose tea due to its antioxidant and anti-bacterial properties, the global tea market is predicted to grow further in the near future, and the top tea-producing countries are also indicated to continue ruling the market in terms of tea production, tea exports and tea consumption over the next few years.

China, India, and Sri Lanka were the three primary tea exporters in the world. India surpassed Sri Lanka and grabbed the second spot in tea exports in 2019. China exported tea amounting to US$2 billion, while India exported tea worth $803 million. However, Sri Lanka exported tea for $721.3 million. European nations exported at 16.8%, while 9.1% of tea shipments originated from Africa.

Why is Tea Good for Health?

Tea has long been regarded as one of the most prevalent and beneficial beverages across the globe. Tea leaves contain various health benefits covering antioxidants, vitamins, trace minerals, and various amino acids which are believed to be good for having strong immunity, lower cholesterol, enhanced metabolism, prevention of cancer, etc.

Kenya is categorized in third place on the top 10 tea producers list. Kenya is well understood as one of the world’s largest black tea-producing countries and the top black tea exporter in the global market. The African country of Kenya registered a 13% annual growth in its tea revenues. Tea is Kenya’s top export commodity. About a third of its export volume is shipped to tea-loving Pakistan. Kenya’s low-priced tea makes it especially competitive and provides the country an edge over Asian producers like India and Sri Lanka.

China is the world’s largest tea-producing country and the biggest tea exporter for centuries. China’s Minister of Agriculture also notifies that China produced over 2.4 million tons of tea in 2016, accounting for 40% of all the tea produced in the world. Its perfect climatic conditions and government aid have kept China at the helm of the tea-exporting business for centuries. China also produces a few of the numerous expensive specialty brews like the Da-Hong Pao tea.

The tea industry in Sri Lanka demonstrated its greatest year-on-year crop shortfall in current times, as the sub sector faces different challenges due to severe weather conditions, coupled with government restrictions on fertiliser subsidies. However, the government’s recent decision to move 100% organic overnight has drastically hurt the nation’s tea exports, which have earned a 23-year low. Sri Lanka’s plunge into an economic crisis makes it challenging to predict when the situation will improve.

Tea is one of the best beverages in India. The land of diversity has a majority population who start their day with a cup of tea. India is the 4th biggest exporter of tea in the world after China, Sri Lanka, and Kenya. In recent months, India has filled up the export gap left by Sri Lanka’s reduced supply. Russia and Iran are two of the leading destinations for Indian tea exports.

The nation of Poland has appeared as a European leader in the export of tea. Overtaking countries such as Germany and the United Kingdom, Poland imports tea from Kenya, Sri Lanka, and India and further exports it to countries like France and the United States.

Soaring fuel prices and food insecurity might impact the tea trade in the coming months. But the emergence of flavored and specialty teas will keep our palates exploring for more. Safe to say, the future looks willing to be a tea-some affair!

So, global tea production and consumption will continue to grow over the next decade, mainly driven by rising demand in growing and emerging countries especially China, India, and Japan. Meanwhile, the tea exports from major tea exporting countries, such as Kenya, India, Sri Lanka, China, Argentina, Vietnam, Uganda, Tanzania, and Rwanda are also expected to increase over the near future, due to the upward movement in drinking tea in Asia Pacific, Europe, and North America.
Eximpedia is a foremost provider of export import data. It furnishes up-to-date, trustworthy, and accurate Global Import-Export Trade Statistics and trade data for several countries, including Kenya, Mexico, Pakistan, Kenya, the United States, and Russia. Eximpedia can be your most reliable service provider if you're looking for reliable global trade data. Send an email to info@eximpedia.app right away to obtain import-export data.