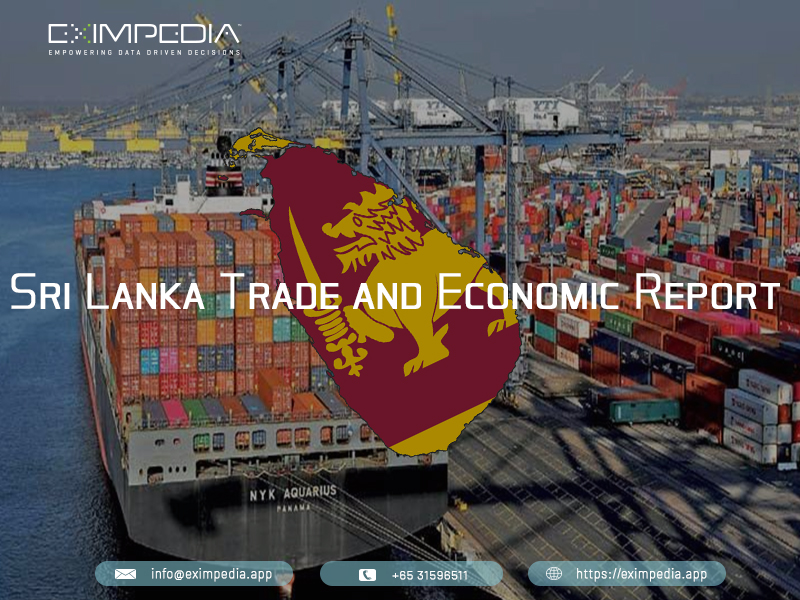 Golden-hued sand beaches with hump-backed whales rising and plunging in the deep far sea currents. Green slopes, muddy pathways, and paths, all lead to mysterious monasteries. Cities with skyscrapers and slums coexist in relative, if not full, harmony.
The place as described is none other than Sri Lanka, a culturally rich country. The nation is an island in the Indian Ocean with no geographical boundaries with other countries. Shipping routes connect South East Asia to the Gulf, Africa, and Europe via Sri Lanka. Despite its geographical closeness to the region's leading commercial nations, Sri Lanka is plagued by a lack of foreign exchange, surging inflation, and troubling levels of trade imbalance. Industrialized countries such as China, India, and Japan are major importers of manufactured products in Sri Lanka. Because of the enormous trade deficit, the costs of basic foods and medications have reached all-time highs.

Moreover half of the country's exports are derived from garment manufacturing. The industry employs around 15% of the workforce in the United States. Agriculture is another major export. In the worldwide export market, Sri Lankan coffee, tea, and spices command premium rates.
Consumer products, such as clothing, tea, rubber articles, mineral fuels such as oils, electrical equipment, textiles, and fish, are the most commonly exported. Top export destinations are the United States, the United Kingdom, India, Germany, and Italy.

The COVID19 epidemic has severely harmed the Sri Lankan tourism economy, contributing to a foreign exchange problem. Sri Lanka was running out of cash to pay off its international debt. To shore up reserves, they decided to hike tariffs and discourage imports. This has resulted in domestic products scarcity and inflation. Farmers are also finding it difficult to purchase fertilizer and seeds for their crops. To conserve money, the country has had to pay Iran in tea exports.
Mineral fuels, electrical equipment, machinery, intermediate fabric for value addition, and plastics are the most important imports into Sri Lanka. India, China, the United Arab Emirates, Singapore, and Japan are their biggest import partners.

In the near term, Sri Lanka has relied on India, China, and Bangladesh to ameliorate their problems. Although the hefty interest rates associated with these injections can be quite damaging. Sri Lanka needs reserves from the International Monetary Fund to repay its loans. The economic incompetence that has led the country to this point must be rectified.

Sri Lanka is a nation of tenacity and endurance. After decades of suffering under British control, Sri Lanka has seen the horrors of civil conflict and subsequent natural calamities since its independence. Because of their strategic location on the Malacca straits, they have the potential to become a significant maritime destination.

In 2020, GDP will have shrunk by 3.6 percent. The economy shrank by 1.8 percent in the first quarter of 2020, mostly due to the epidemic, before plummeting by 16.4 percent in the second quarter of general lockdown. By early June, successful containment had allowed a large portion of the economy to reopen, resulting in 1.3 percent growth in the third quarter. The unemployment rate increased from 4.8 to 5.5 percent in 2020. Construction fell by 13.2 percent, while manufacturing fell by 3.9 percent. Transportation was down 6.7 percent, while lodging and restaurants were down 39.4 percent. This was partially offset by a 15.4 percent increase in telecommunications, 10.9 percent growth in banking, and 1.4 percent growth in wholesale and retail commerce. The Colombo consumer price index measures yearly average inflation.

The Sri Lankan economy is confronted with two major challenges: underlying fiscal weakness and decreasing foreign liquidity. On a brighter note, the country has been liberated from the chains of a three-decade-long civil war, which has significantly improved its economic prospects. However, at the same time, the The country's export and tourism sectors are under pressure due to sluggish global demand. Furthermore, to attract foreign investment, there is a contemporary duty to comply with fiscal guidelines.

Funding - It remains to be seen if the current rate of budgetary consolidation will be maintained in the future.
Future - The ruling coalition is solidly in control, which bodes well for political stability but also fosters corruption.

inclinations toward authoritarianism This might harm the commercial and social environment. Overall, the sociopolitical environment appears to be stable.