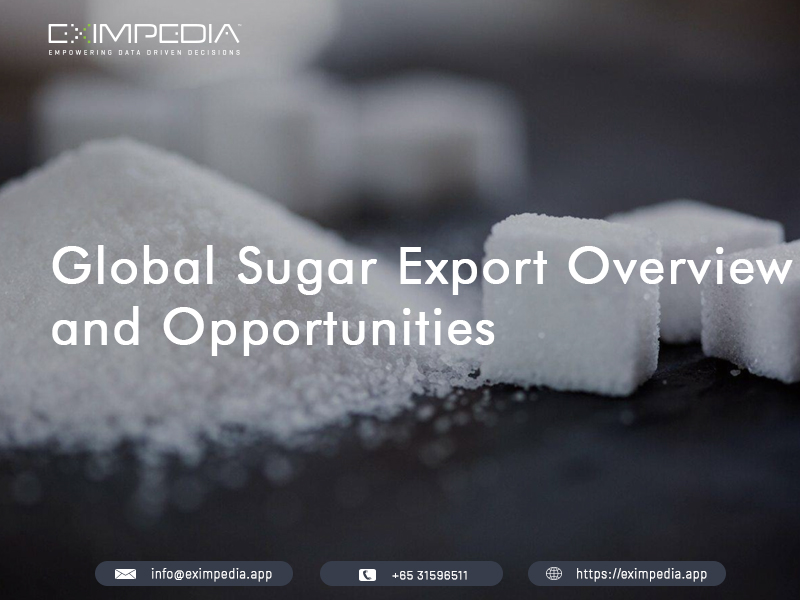 Currently, around 110 nations produce sugar from either cane or beet, while eight countries produce sugar from both cane and beet. Sugarcane contributes to roughly 80% of worldwide sugar output. During the October/September season, the top 10 producing nations (India, Brazil, Thailand, China, the United States, Mexico, Russia, Pakistan, France, and Australia) contributed to over 70% of world output.
Sugar crops provide alternatives to food production, such as livestock feed, fiber, and energy, notably biofuels (sugar-based ethanol) and co-generation of electricity (cane bagasse). Sugarcane is widely recognized as one of the most significant and efficient biomass sources for biofuel generation. Sugar production and processing are linked to a variety of environmental and social challenges, and sugar crop producers, processors, as well as energy and food industries, are looking for solutions to address concerns about sugar production, biofuels, and sustainability.

Between 2001 and 2018, global sugar consumption climbed from 123.454 million tonnes to 172.441 million tonnes, representing a 2.01% yearly raise. However, global sugar consumption growth has slowed significantly in the second part of the present decade to less than 0.84 percent per year (average for 2016-2018), with no increase in 2018.
India, the European Union, China, Brazil, the United States, Indonesia, Russia, Pakistan, Mexico, and Egypt are all major sugar consumers.
The following are the most important factors influencing sugar demand:
?    population increase
?    income per capita
?    the cost of sugar and other sweets, and
?    Health concerns are being debated.

Sugar is a sweet, crystal-like material that is commonly used as a sweetener in beverages and foods. Sugars are divided into two types: monosaccharides and disaccharides. Simple sugars include fructose, galactose, and glucose. Lactose, maltose, and sucrose are examples of compound sugars. Sugars come in a variety of forms, including agave nectar, coconut sugar, maple sugar, and high-fructose corn syrup. The most prevalent kind, however, is sucrose, which is found in the stems of sugarcane and the roots of sugar beets. While sugar contains carbs and energy, it is also high in empty calories. Consuming significant quantities of sugar might provide a satiating feeling without providing any vital nutrients. Furthermore, studies have connected the use of sugary drinks to the development of type II diabetes.
Between 2014 and 2015, worldwide sugar output was roughly 197 million metric tonnes. Asia accounted for nearly one-third of total manufacturing output, while South America and Europe contributed 22% and 15%, respectively.
Over the last five years, more than 60 million metric tonnes of sugar have been shipped globally. Brazil was the world's biggest sugar exporter in 2014/2015, followed by Thailand, Australia, and India.
Sugar exports are expected to remain highly concentrated over the next decade, with Brazil maintaining its position as the major exporter (from 35 percent of world trade in the base period to 38 percent by 2029). Over the projected period, the depreciation of its currency with the US dollar will attract investments and boost the industry's competitiveness. The sugar market in Brazil, on the other hand, will continue to fight with high ethanol output. Sugar exports are expected to increase by 6.3 Mt over the baseline period.
Thailand, the world's second-largest sugar exporter, produces very little ethanol directly from sugarcane (less than 2%); instead, molasses or cassava are utilized. This established Asian sugar producer is expected to gradually recover from the current drop in production to gain international market shares by the end of the projection period, accounting for 18% of world sugar exports by 2029 (versus 16% during the base period) and reaching 12.7 Mt of sugar exports by 2029.
Throughout the next decade, India is expected to have sufficient supply and policy assistance to keep its exports at around 4 Mt per year. Sugarcane production in Australia will be constrained by the availability of irrigated land; as a result, output levels are expected to stay similar to the current season's relatively low levels, which are nonetheless much above domestic demand. As a result, the country will continue to export about 80% of its output.
Imports of sugar in the world are less concentrated than exports (Figure 5.8). According to forecasts, Asia and Africa will witness the fastest rise in sugar demand, influencing the ranking of major importers. During the base period, the United States (2.7 Mt), Malaysia (2.0 Mt), Korea (1.9 Mt), the European Union (1.6 Mt), and India were the top importers (at 4.8 Mt apiece) (1.5 Mt). Indonesia is expected to strengthen its position as the biggest sugar importer (7.5 Mt) during the next decade, followed by China (6.3 Mt), the United States (2.7 Mt), Malaysia (2.4 Mt), Korea (2.1 Mt), and India (1.5 Mt).
Because of sugar quotas, the European Union has become a less appealing export destination for nations with preferential trade agreements; European Union sugar imports are expected to fall further to 1.3 Mt by 2029. The EU HFCS trade will be relatively unchanged since output is projected to mostly meet domestic demand.