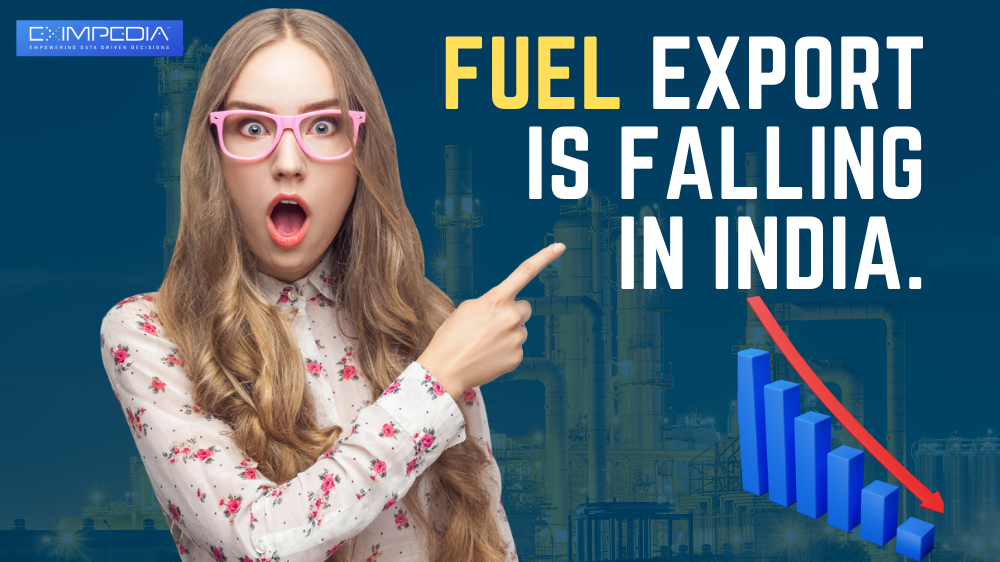 In order to meet the rising domestic demand at a time when local refineries are running above their nameplate capacity, the net export of diesel and gasoline fell by 23% and 8%, respectively, in June over May.

India is a net exporter of petroleum products and has the fourth-largest refining capacity in the entire globe. Two-thirds of the nation's total petroleum exports are made up of gasoline and diesel.

An industry expert stated that the decrease in net exports is a sign of rising refined fuel consumption in the nation and a prediction of continued high fuel demand in the months to come.

The largest exporters of refined fuels are private refiners Reliance Industries (NSE) 2.13 percent and Rosneft-backed Nayara Energy, which account for 80–85 percent of the nation's total petroleum exports. The export market is also served by state-run standalone refiners like MRPL NSE -2.41 percent, which don't have a fuel retail chain.

For the most part, private and independent refiners sell petroleum to state-owned refiners, which run gas stations, at international prices in order to make up for the lack of supplies in the domestic market. However, they turn to international marketplaces if they can't rapidly obtain enough supply.

In recent years, one of the most significant commodities has been oil. The economy is heavily reliant on oil. Because of this, the cost of oil affects practically every economy. Global crude oil prices have decreased by almost 40% this year, from $110 per barrel at the beginning of the year to $60 per barrel today. In nations like Russia, which depends on oil exports, this has led to a crisis.

One of the biggest oil importers in the world is India. Nearly 80% of its entire oil needs are imported. One-third of its total imports come from this. India is greatly impacted by the price of oil because of this. The value of its imports would decrease with a price decline. This aids in reducing India's current account deficit, or the foreign currency it owes to the rest of the world. According to research, a $10 per barrel drop in oil prices contributes to a $9.2 billion reduction in the current account deficit. This represents just about 0.43 percent of the GDP, which is a gauge of the size of the economy.

The price of oil has an impact on the overall economy, particularly as it is used for the transportation of products and services. All goods and services experience price increases as a result of rising oil prices.
The rising cost of gasoline and diesel also directly impacts all of us. In turn, inflation increases. An economy suffers from high inflation. Additionally, it has an impact on businesses, both directly through an increase in input costs and indirectly through a decrease in customer demand. This is why India benefits greatly from the decline in global crude prices. According to research, every $10 per barrel decline in the price of crude oil helps lower retail inflation by 0.2 percent and wholesale price inflation by 0.5 percent.

The exchange rate for rupees

A free currency like the rupee is valued according to its popularity in the currency market. This is why the current account deficit has a significant impact. A country with a large deficit must sell rupees and purchase dollars in order to pay its bills. The rupee's value is lowered as a result. Thus, a decrease in oil prices is advantageous for the rupee. The drawback is that each time the price of oil declines, the dollar gets stronger. Any advantages from a decrease in the current account deficit are thus nullified.

Although the decline in the price of oil may benefit India, it also has drawbacks. It directly has an impact on the nation's producers of petroleum for export. According to news reports, India is the sixth-largest supplier of petroleum products worldwide. This increases its annual revenue to $60 billion. Any decrease in oil prices has a detrimental effect on exports. Any decrease in exports is bad news at a time when India has a trade deficit due to high imports and low exports. In addition, many of India's business partners and recipients of its exports are net oil exporters. Their economy could be impacted by a drop in oil prices, which would reduce demand for Indian goods. India and its businesses would be impacted in a secondary way. For instance, the devaluation of the Naira, the currency of Nigeria, caused the share prices of Bharti Airtel and Bajaj Auto to drop. Both businesses are well-represented in the African nation.