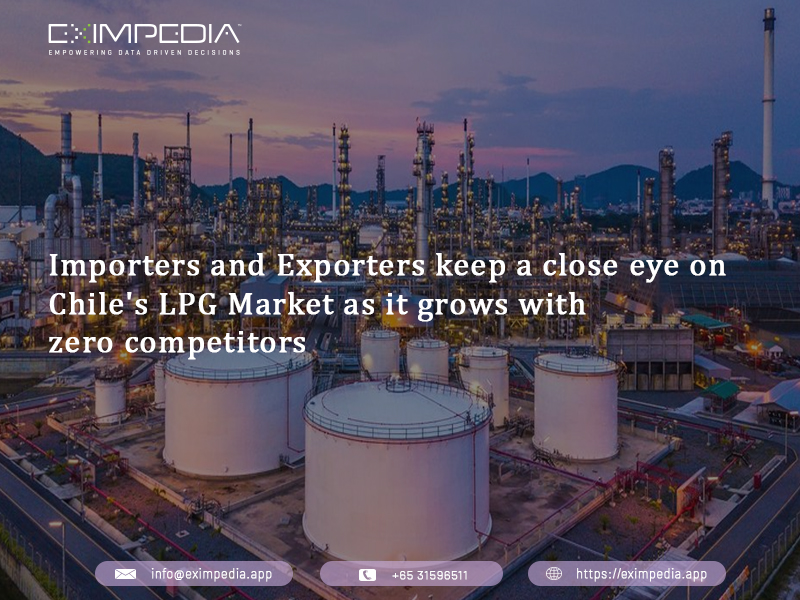 Chile's average LPG imports from the US are 135,000 tons per month. Because of the lack of merchants and competition in Chile's LPG industry, this value has only grown since 2018. As the demand for LPG in Chile has surged by up to 80%, the Fiscalia Nacional Economica has opted to enhance market conditions by focusing on competition. Not only that, but FNE also warned that the competitive circumstances in the LPG market are not optimum, to warn the main merchants.

Reasons for the fall in the LPG market

According to a few reports obtained by international trade data analysts, FNE has reasons to issue an alarm. FNE did, in fact, justify one of the grounds as having a high concentration level. It was also said that just a few economic groupings in the industry had total control of the natural gas and LPG markets through assets.
In addition, the governmental structure shifted the focus of the industry's vertical integration. Vertical integration refers to a supply chain strategy in which corporations do not give suppliers, retailers, and distributors direct authority. Although vertical integration has previously proven helpful to businesses, the Chile LPG industry has been subjected to a high degree of this strategy.
The national economic prosecutor's office (FNE) is now investigating Chile's natural gas and LPG markets intending to increase competition in the industry.
Earlier this month, the FNE issued a preliminary warning that the sector's competitive circumstances "were not ideal," which might affect final consumer prices.
To justify the probe, the FNE cited the industry's excessive concentration and the fact that the same economic groupings own assets in both the natural gas and LPG sectors, implying a possible concern.
The agency also stated that there was a significant degree of vertical integration and that it was customary for players to have a role in importing, storing, transporting, and distributing gas, which might contribute to inefficiencies in the supply network.

It also stated that pricing varied widely among locations, brands, and types of supply, and even in some cases with the same type of gas provided by various suppliers using the same distribution techniques, implying that there were problems.

A GLOBAL VIEW OF THE NATURAL GAS MARKET:

Chile imported 80 percent of its domestic gas usage as LNG in 2018 via two import facilities in Quintero and Mejillones. The remaining 20% was mostly generated by NOC Snap in the Magallanes Basin in the country's far south, as well as private Snap partners.
As gas production rebounded in Argentina (26,746Tcal of 56,562Tcal imported in the year, according to the national energy agency CNE), considerable amounts were imported via pipeline in 2019. Large amounts were also imported (as LNG) from the United States (20,390 Tcal) and Trinidad and Tobago (7,756Tcal).
LPG was mostly imported from Argentina and the United States (total imports of 15,176Tcal in 2019). According to CNE data, LPG sales increased 0.7 percent year on year to 2.43Mm3 (million cubic meters).
Domestic production accounted for around 25% of local LPG usage in 2018, with the remainder imported via three terminals: Gaspar and Oxiqum in Quintero and Hualpén in the Biobo area.
According to the FNE, the country's primary LPG distributors own or have contracted the whole capacity of these terminals: Gasco and Abastible are supplied by Gaspar (145,000m3 storage capacity) and Hualpén (40,000m3), respectively, while Lipigás is supplied by Oxiqum (50,000m3).
Following a drop from 2011 to 2013, the Polish LPG market increased by 2 to 3 percent in 2014-2015 and by roughly 4.0 percent in the first half of this year, according to figures provided by the Polish LPG organization.
In January-June, Poland produced 200,000 tonnes of liquefied gas, with imports totaling 1.055 million tonnes, up 3.4 percent from the same time the previous year, and exports totaling 106,000 tonnes. Domestic consumption increased by 3.9 percent year on year to 1.149 million tonnes.
According to the organization, Russia accounted for 61.1 percent of LPG imports in the first half of this year, with Kazakhstan accounting for 19.7 percent, Belarus accounting for 10.1 percent, Lithuania accounting for 4.6 percent, and other countries accounting for 4.5 percent.
A sharp drop in LPG supplies to Poland from Belarusian oil refineries and gas processing plants was caused by dwindling Russian oil supplies to Belarusian plants, including the Mozyr oil refinery in the second half of the year, and a widespread of light hydrocarbons at Belarusian gas processing plants.
Rising LPG use is due to a growth in the number of cars that utilize LPG fuel, as well as the fact that it is less expensive than conventional kinds of motor fuel, often 35-45 percent less expensive than A-95 gasoline during the majority of the year.