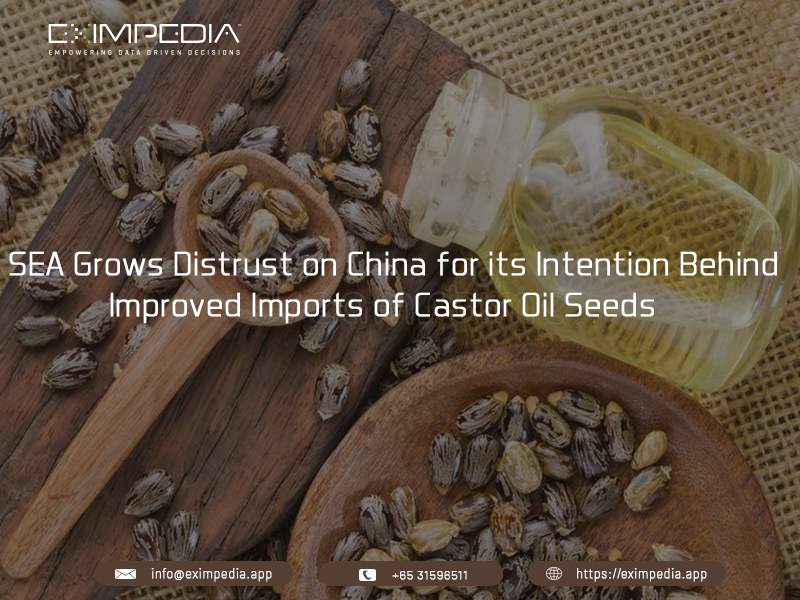 According to India Export Data, China purchases up to 2.5 lakh tonnes of Castor Oil seeds every year. Nonetheless, this fact appears to be advantageous to India. However, the SEA, or The Solvent Extractors Association of India, has grown skeptical of China's odd interest in obtaining such a large number of castor oil seeds. To the reader's astonishment, SEA has prophesied an onerous shift in the sector as a result of such significant export to China.

China has recently obtained dubious views from several nations, including the United States, India, and the United Kingdom. Not only that, but considering the present epidemic crisis, several countries in India have taken efforts to slow down and freeze commercial connections with China.
Here's a fascinating fact: According to international import-export data, India's earnings from the export of castor oil seeds have increased to 6 000 crores each year. Nonetheless, the Union Ministry's top priority for business and industry right now is to "not blindly trust China." According to some accounts, China is in a purchasing frenzy. Indian ministries, including SEAI President Atul Chaturvedi, have requested an inquiry of the largest exporter of castor oil seeds in India and China.

China's global import and export data, as well as its commercial relationships with other countries, are no longer hidden. For example, in recent years, China has not only seized a large number of castor oil seeds from India in exchange. It also raised steel imports from India by 30% to 70%, more than doubling! Furthermore, China is not just targeting India for its "import-spree," but also Australia. A high-end official Australian website also expressed alarm about China's desire to increase its purchases of cobalt, food goods, and iron ore.
On the one hand, practically every country is experiencing a financial crisis, declining GDP, and the possibility of major depression. Meanwhile, China, the major creator of CoronaVirus, inexplicably increased its GDP by 4.9 percent in 2020.
According to a key trade association, China intends to import huge volumes of castor seed from India, potentially creating a scarcity of raw material for the local edible oils sector.
In 2020 China has been actively purchasing commodities in recent months to increase its State Reserves. We hear that they want to purchase large quantities of castor seed from India. "Traditionally, China buys castor oil and derivatives from India, but this newfound interest in looking to buy castor seeds has huge ramifications for our domestic industry, as they may be starved for raw material," Solvent Extractors' Association president Atul Chaturvedi wrote to Commerce Minister Piyush Goyal in a letter.
India has a highly well-developed processing sector and our exports of Castor oil touch about Rs. 6,000 crore per year." Both directly and indirectly, the processing industry employs a considerable number of people. If China begins to aggressively purchase castor seeds, our processing business will suffer, which is not in the national interest.
All oilseeds, including castor seed, are freely exportable under the present export policy. "China may make use of this policy to acquire castor seed from India to crush at their end." This will result in a loss of value addition, capacity utilization, and export market for the local crushing industry. It is critical that raw material exports are avoided and that value addition continues to occur within our nation.
According to the Solvent Extractors Association of India (SEA), China has been seeking to acquire a large amount of castor seed from India. "In recent months, China has been actively purchasing commodities to increase its state reserves." We hear that they want to purchase large volumes of castor seeds from India. Traditionally, China purchases castor oil and derivatives from India, but this newfound interest in purchasing castor seeds has significant implications for our local sector," the group claimed in a letter to Piyush Goyal, Union Minister for Commerce and Industry.
India produces over 85-90 percent of the world's demand for castor oil and its derivatives. We have a well-developed processing business, and our castor oil exports total almost Rs 6,000 crore per year. A vast number of people are employed directly and indirectly by the processing sector. "If China begins aggressively purchasing castor seeds, our processing business will suffer," the organization stated in the memorandum. According to BV Mehta, executive director of SEA, the country's primary goal should be value addition within India, and raw material (castor seed) exports should be prohibited.
The group has requested the government to take appropriate measures, such as setting a minimum export price (MEP) or imposing an export charge on castor seed, to prevent the export of castor seed.
So, what can we glean from China's ever-expanding import-export data? Well! China, according to EximPedia analysis, is conserving goods for an unexplained purpose. It appears that the accused country has foreseen unfavorable future circumstances. As a result, it is preparing for a "crisis" that the rest of the world is not familiar with.