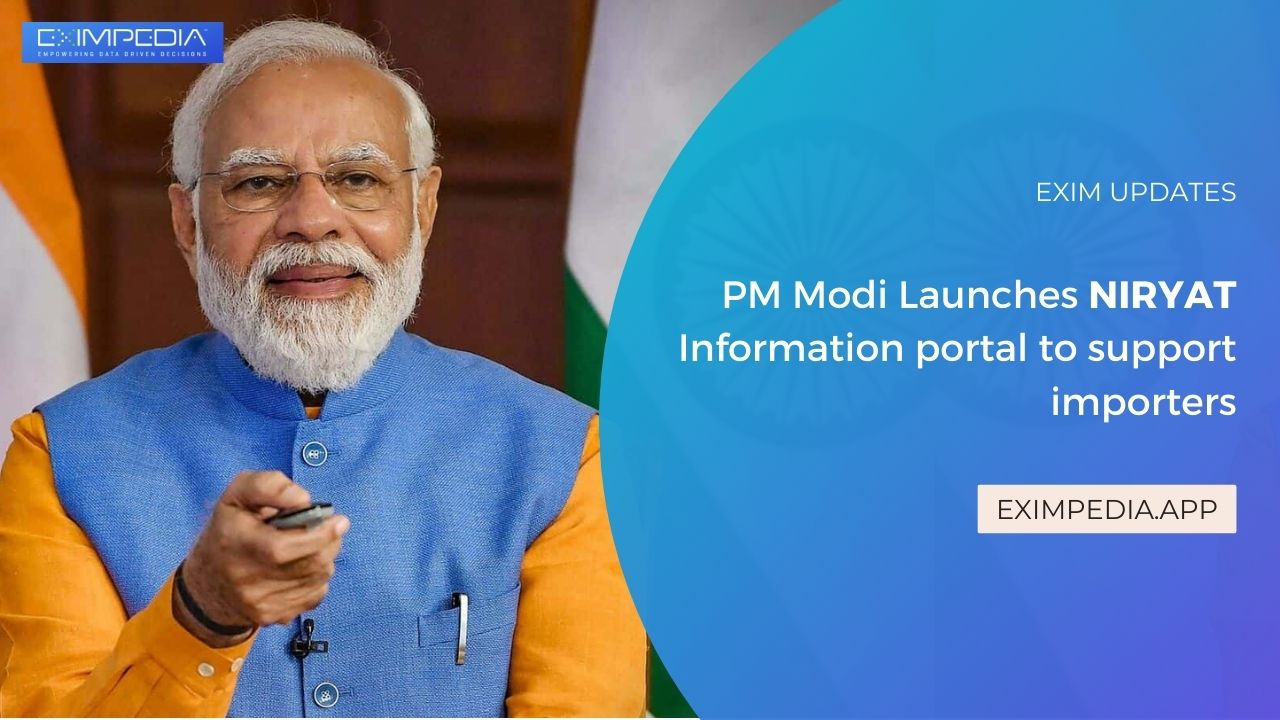 Prime Minister Narendra Modi Launches NIRYAT Portal, which gives the nation manageable access to essential export import data related to India’s foreign trade. Appealed to exporters and the industry to improve long-term export targets for themselves and suggest methods for the government to acquire those figures. The main purpose of this portal is to deal with the import and export analysis of India. Let’s explore the notification in detail –

Prime Minister Shri Narendra Modi launched the new premises of the Ministry of Commerce and Industry - ‘Vanijya Bhawan’ - on 23rd June 2022. During the Programme, the Prime Minister also founded a new portal - NIRYAT (National Import-Export Record for Yearly Analysis of Trade) which is developed as a one-stop platform for stakeholders to obtain all required information related to India’s foreign trade.

The Prime Minister will also address the assembly on the occasion.
He established the NIRYAT (National Import-Export Record for Yearly Analysis of Trade) portal, which will dedicatedly deal with the import and export analysis of India.

Launched by the centre to deliver important real-time data to all stakeholders, the portal has been pegged as a one-stop medium for stakeholders for manageable access to critical information related to India’s foreign trade by the Centre.

Launching the NIRYAT portal, Modi stated, The government has been working towards ensuring ‘Citizen-Centric Governance’ for the previous eight years and today we have taken another significant step in this direction. Today, the country is obtaining a gift of a new and modern commercial building and NIRYAT portal.

This new Vanijya Bhawan and NIRYAT portal describe our aspirations of an ‘Atmanirbhar Bharat’. It will convey positive changes in the field of trade and commerce, especially for MSMEs," PM Modi expressed after launching the NIRYAT portal. Users can log in to the portal with their usernames and passwords and access all import and export data of the country easily.

“From this portal, critical information related to more than 30 commodity groups exported to more than 200 countries of the world will be unrestricted. In the future, information related to district-wise exports will also be open on this. This will also boost the efforts to develop the districts as vital centres of exports”, the Prime Minister stated.

Know about the NIRYAT information portal?

PM Narendra Modi launched Niryat Portal and unlocked Vaniya Bhavan on Wednesday, June 23, 2022. NIRYAT, which stands for National Import-Export Record for Yearly Analysis of Trade, is the full form of the portal. The prior goal of the Niryat Bandhu scheme is to enhance international trade business and to assure that all business actions are carried out legitimately. Through the Niryat Portal, interested parties can get important information about India’s international commerce.

The Niryat Bandhu scheme was notified as a part of the foreign trade policy. The Niryat Portal is devoted to analysing India’s imports and exports in a comprehensive manner. Niryat Portal’s primary mission is to act as a companion and mentor to the next generation of entrepreneurs entering the field of international trade. According to the government’s objectives, the NIRYAT portal will bolster India’s financial sector in a way that is in line with the country’s focus on the 3Ts of trade, tourism, and technology. The absolute budget allocation of the Niryat Bandhu scheme is about 23 crores.

The Niryat Bandhu Scheme is one of the most influential programs in terms of its assistance to India’s success in the recent past. The government is actively functioning to make it easier for businesses to operate and to boost exports, and the portal will enable it to achieve this. The Portal will be an education hub for young entrepreneurs who desire to step into the field of international trade. Also, to boost your Export Import Business, you can obtain reliable Global Trade Data from eximpedia; we provide genuine export-import data, product descriptions, HS codes, Indian exporter importer names, and shipment details of your product. If you have any queries regarding your business, our professionals are always there to provide quality services to boost your business.