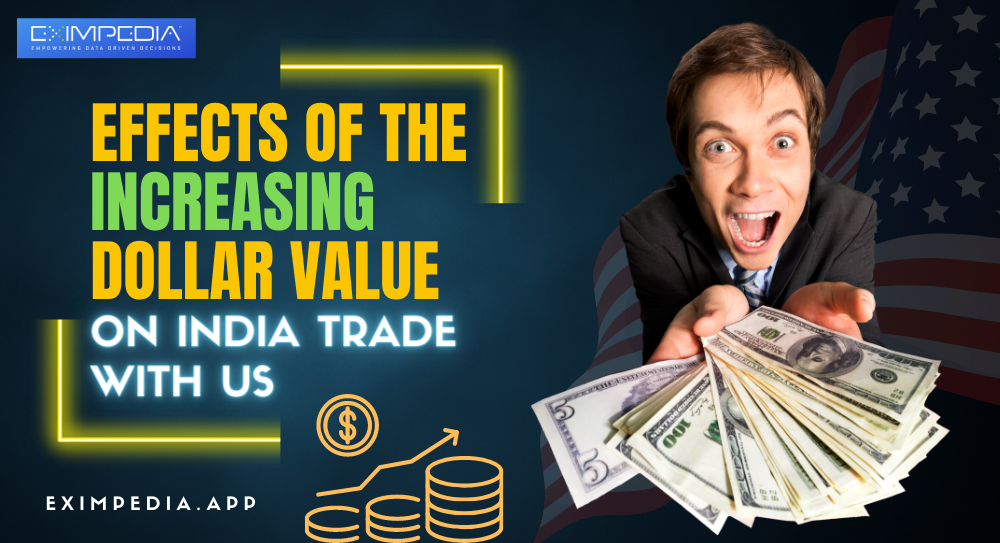 The dollar's effect on the Indian economy

The US economy is one of the strongest in the world, and as a result, the US dollar is among the strongest currencies in circulation. The US dollar is a universally recognized unit of account for international trade and US import data. Many people also view it as a secure investment. Furthermore, as part of their monetary policy, nations hold dollars in their central reserves. According to data released by the IMF (International Monetary Fund), the US dollar made up around 60% of the foreign exchange reserves held by the central banks of most nations at the end of the third quarter of 2019. Additionally, nearly 90% of all foreign exchange trading and 40% of all global debt are issued in dollars.

The British Pound, Japanese Yen, Swedish Krona, Canadian Dollar, US Dollar, and Swiss Franc are the six most valuable currencies in the world that the US Dollar Index compares the value of the dollar against. When the index is high, the dollar is doing well; when it is low, it is doing poorly. Despite not being included in the index, changes in the dollar's index relative to other currencies have an effect on the Indian economy.

The inflationary tendency in India is also influenced by the dollar index. A rise in the dollar index strengthens the dollar while weakening the value of the rupee. A weaker rupee raises the price of imports and reduces India Inc.'s profitability by raising the cost of production. Cost increases cause inflation, which drives up the cost of products and services to the detriment of consumers. As a result, when the dollar gains, the entire GDP (Gross Domestic Product) is affected and slows down.

On the other hand, corporations that export benefit from a climbing dollar index since they can generate more money in US dollars. Companies in the IT sector and pharmaceutical firms that export the majority of their products and services benefit from rising dollar values, and vice versa.

How It Will Affect Export Import Scenario

What is Real GDP?

Real GDP is one element that influences exchange rates. Increases in the real GDP of the United States will boost the flow of dollars to other nations, which will lead to a decline in the value of the dollar.

What are the Rates of Inflation?

The rate of inflation is a further factor that influences exchange rates. The supply of dollars to foreign countries will rise as the U.S. inflation rate rises, but demand for dollars abroad will fall, leading to a decline in the value of the dollar.

The rate of interest is a third element that influences exchange rates. As U.S. interest rates rise, less money will be available to export to other nations and more will be needed there, pushing up the value of the dollar.

Since the 1990s, a wide range of items has been included in India's import data. India has traditionally been the first country in line to import products from many different nations, including petroleum, pharmaceuticals, and other items. It has been noted that the nation's trading relations with far-off nations like China, the United States, Britain, and others appear to have strengthened during the past few decades. Let's examine the top 5 items that are frequently imported into India today. Presented to you are statistics on Indian imports that will help you start an import firm in India:

The fact that India also imports gold from other nations surprises several jewelers in India. For centuries, India was referred to as the "Golden Bird." However, it now imports gold in such massive quantities that it costs more than 32 billion USD.

In order to grow its steel industry, it was claimed in 2018 that India has abundant supplies of coal and solid fuels. India's coal reserves total 3,19,020 million tonnes as of 2019.

The country produces very little domestic coal, so its reserves are nowhere in the top 80 in the world. The top country in the United States.

Are you aware? The only diamond mine in India is NDMC Panna. According to data on international commerce, India is the biggest diamond importer, with a total value of about 23 billion USD. Non-traditional diamond imports are dependent on the United Kingdom, the United States, Japan, and Thailand.

Petroleum gases were imported in 2019 in India at a cost of nearly 17 billion USD, according to US trade data. The nation is highly reliant on Saudi Arabia's Aramco, Abu Dhabi National Oil Corporation, Kuwait Petroleum Corporation, and Tasweeq of Qatar, according to data.